By carlos floresJuly 9, 2020No Comments

Having been a colleague and collaborator of David Bohm for over thirty years, I congratulate Paul Howard for producing a film that captures the spirit of David Bohm as I saw him. The film is not about physics or about Bohm’s physics, but about how physics in the hands of a visionary led to a world view that was in complete contrast to the traditional reductionist and mechanical view. David Bohm has taken Niels Bohr’s notion of ‘quantum wholeness’ to a new level of understanding. 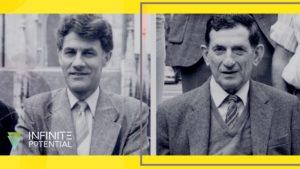 Bohm was recognised by his contemporaries and invited to the Shelter Island conference after World War II to discuss the future development of American theoretical physics. Amongst the group attending were Oppenheimer, Feynman, Schwinger, Wheeler and other greats of American theoretical physics. Bohm had pioneered the development of plasma physics; he had written a text book entitled “Quantum Theory” where he explained Bohr’s viewpoint. Later with Aharonov, Bohm clarified an unexpected quantum effect discovered by Ehrenberg and Siday. This effect became known as the AB effect and it today forms the basis of modern gauge theory. Bohm also showed that the Einstein-Podolsky-Rosen paradox could be described in terms of spin and thereby made the implications of quantum entanglement more apparent. 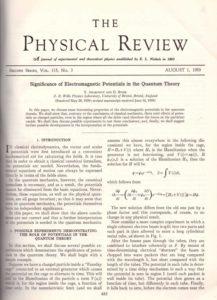 It was Bohm’s proposals for a new interpretation of quantum mechanics that engendered much opposition from the mainstream physics community. Bohm had taken a clue from an algebraic approach that appears in Dirac’s “The Principles of Quantum Mechanics” and extended it to all powers of Planck’s constant. This produced Bohm’s new interpretation where the notion of a particle with a local momentum following trajectories can still be maintained. The experimental predictions of Bohm’s approach agreed with the standard interpretation, but there appeared a new quality of energy, the quantum potential energy. Such an additional energy had already been noticed by de Broglie, Fermi and Feynman who called it ‘mysterious’; it had even been used by von Weizsäcker to obtain a better estimate of the Thomas-Fermi kinetic energy functional. The presence of this energy offered an explanation for the strange behaviour of the Bohm trajectories and also provided an explanation for quantum non-locality, but in an unwelcome way for many. Although the quantum potential energy emerged from the formalism, few were originally prepared to contemplate its existence. Heisenberg called the quantum potential energy ‘ad hoc’, even though it emerged from the Schrödinger equation, and claimed “Bohm was trying to prove 2+2=5”!

The problem was there seemed to be no way of directly observing the presence of this new quality of energy. However the introduction by Aharonov and Vaidman of the notion of weak values opened up the possibility of a way to observe the effects of the quantum potential experimentally.

Aephraim Steinberg and his team in Toronto were the first to show that momentum flow lines produced by photons had a remarkable similarity to the Bohm non-relativistic particle trajectories. A group at UCL involving Robert Flack and Peter Barker is at present doing new experiments using atoms to show similar effects. Atoms follow the Schrödinger equation from which the quantum potential energy arose in the first place. Using atoms therefore offers a more direct proof of the presence of this new quality of energy. We were almost there when our labs were closed down because of Covid-19. We are eager to return soon as we are now within sight of our goal. 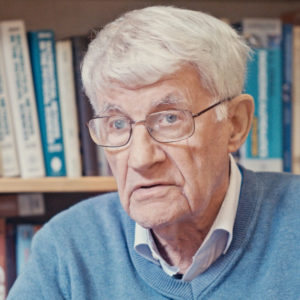