By carlos floresJuly 9, 2020No Comments

One of the troubling things about modern (“quantum”) physics, and which lends a dangerous feeling of esotericism to the field, is the list of proscriptions it often comes with: we can’t know this, you’re not allowed to ask that, you’re asking the wrong question. What makes David Bohm
a hero to me has less to do with the particular view of the quantum world he championed than with his courage in general to ask whatever he wanted to. 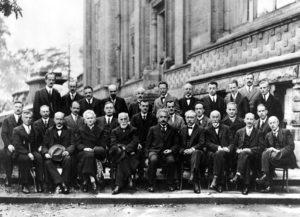 Much of the “conventional” view of quantum mechanics is summarized by the debates Bohr & Einstein had at the 1927 Solvay conference, centered on the idea that what makes quantum mechanics so odd is that particles can be at two places at once: and that if you see a particle emerge from an interferometer, “you cannot ask where it was before it got there.” Bohm’s picture gives the lie to this claim. Reproducing precisely all the predictions of quantum theory, he nevertheless offered a simple, visualizable description of particles following definite trajectories. Whether or not you believe this is the final description of “what is out there” (I’m not certain I do), you can no longer claim no such picture is possible!

As powerful as quantum theory is, thinkers like Bohm believed that its goal must also be to provide an underlying picture of “what is happening” in the real world, not merely to predict the results on laboratory measurement dials. These days, there are numerous approaches to
peering beyond the quantum formalism and trying to ask what it tells us about underlying reality, including “weak measurement,” a perspective I find especially powerful, and which was pioneered by Bohm’s Ph.D. student Yakir Aharonov. 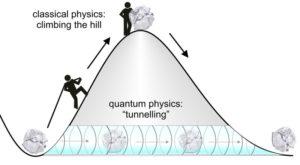 Since 1926, it has been known, for instance, that quantum mechanics predicts that no matter how seemingly insurmountable a barrier, how high what we physicists call a “potential,” there is always some chance for a particle to appear on the other side. This still seems so magical to physicists that we call it “tunneling,” as though to signal that we know there was no way for the particle to climb this hill, and it is almost as though it had traversed some hidden “tunnel” underneath it. Yet this magic is of vast importance, occurring constantly in the nuclear processes that power the sun, but also in photosynthesis, in fast electronic switches, and in fancy magnetometers used for everything from basic research to brain scans. But for nearly a century, physicists skirted the question of “where” the particle was while traversing this tunnel, let alone how long it spent there. You just don’t ask that.

We have recently completed an experiment, using Aharonov’s ideas, in which we show that these questions shouldn’t be forbidden, and that one can get answers to them. I like to think Bohm would be thrilled. In the future, it may even be possible to show experimental traces of Bohm’s own trajectories for these tunneling particles. More and more, laboratory experiments can finally address the deep questions that occupied so much of Bohm’s thought, and probe not only where a system ends up, but what it’s doing on the way. I am optimistic that such studies bring us ever closer to a realization of Bohm’s dream of a unified understanding of reality. 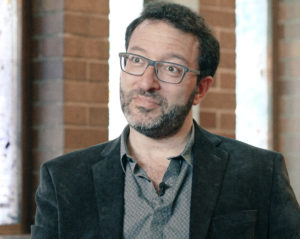